I love the idea of HTML5 iframe sandboxes but I'm unable to apply them the way they are currently implemented.

Why? Because the iframes I want to target are created programmatically. I'm not writing the iframe tags myself, or the code that writes them, so I can't specify the sandbox attribute.

www.spanishdict.com is an ad-supported site, like many other sites out there. We use Google Publisher Tags (GPT) which creates a cross-origin iframe for each ad slot on the page -- automatically. 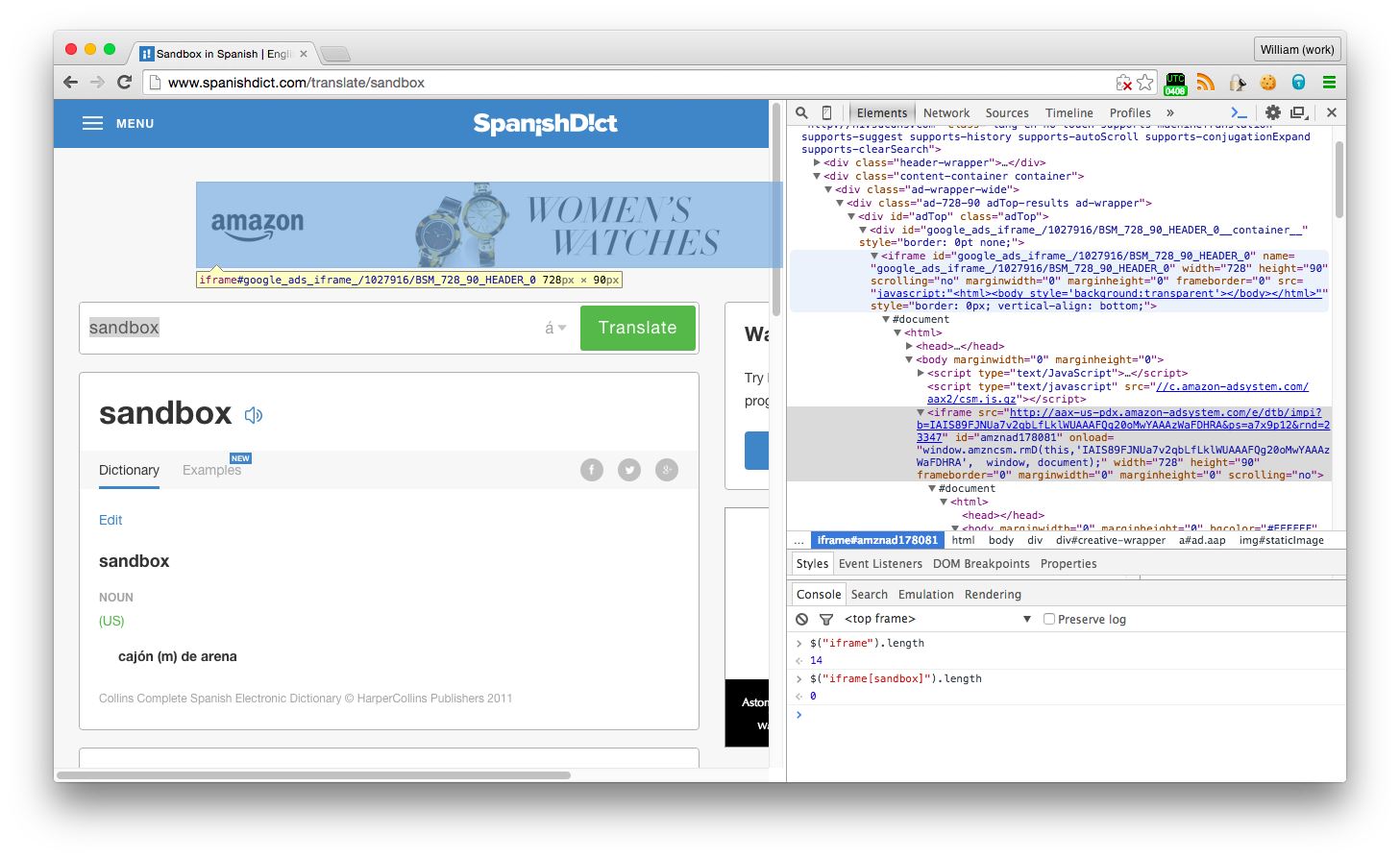 We have relationships with several different ad companies. On every pageview, we load a script from each company so they can evaluate the impression and make their bid (a technique known as "header bidding").

Then the winner of the bid gets to load their creative, which they typically do by creating another cross-origin iframe within the iframe that GPT created and has given them access to. Sometimes you'll see several layers of iframe nesting.

These iframes are all created programmatically. Because I don't create the iframes (or know anything about them ahead of time such as what domains they're going to come from), I can't add the sandbox attribute, which makes it useless for me.

In my ideal world

Ideally, I could set sandboxing to apply to the cross-origin iframes I know are going to be created on my page.

I'd love to be able to say: for all cross-origin iframes, use sandboxing, with the following rules:

(I stuck it on the html tag for lack of a better place to put it. Or maybe it could go in a header.)

With that in place, as the ads created their iframes, sandboxing would be in effect, and I'd know that no top navigation will take my users somewhere they don't want to go, no popups will annoy them, etc. The potential of sandboxes, fulfilled!

(That last rule up above about lower priority doesn't actually exist, but in my ideal world, it would. I noticed that MDN says: "A web worker or a cross-origin iframe has its own stack, heap, and message queue." Which gives me hope that this could be implemented. Prioritizing the top window's code over the ad code would lead to a better user experience, making the page and interactions with it feel snappy. When the ad code (initial flurry of bids, followed by delivery of creatives) competes with our application code, the result is jank and a feeling of heaviness/unresponsiveness that we and our users hate.)